The HarborWalk Theater opened its doors in November 2018. Our mission is to provide a comfortable, intimate, and state of the art venue where everyone can come and enjoy the very best comedy, magic, and hypnosis that the Emerald Coast has to offer! Our theater houses two award winning shows, MAXIMUM MAGIC with Noah & Heather and The Stoked Comedy Hypnosis Show. In addition to these shows, we also host a variety of comedians performing in the HarborWalk Theater throughout the year, so please follow us on social media to keep up with all of the excitement and special events happening in our theater! HarborWalk Theater is available to rent for your next private event (based on availability). Click here to learn more about renting our space.

HarborWalk Theater is owned and operated by award-winning illusionists Noah and Heather Wells. Noah and Heather have been performing hundreds of shows per year for over a decade on the Emerald Coast, with over one million visitors attending their show, MAXIMUM MAGIC. They have over 25 years of combined experience in the entertainment industry.

Noah and Heather Wells, with their daughter London 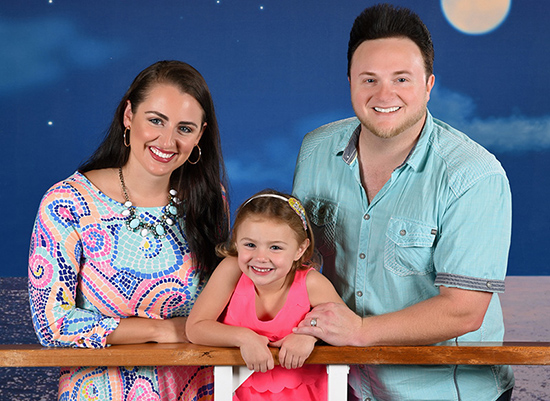 Heather’s performing career began as soon as she could walk. She grew up modeling, dancing, and performing in beauty pageants. Noah’s performing career began at age 7 after attending a magic show. His grandparents bought him a magic kit after that show and he was hooked. When he was 14, he went to work full time for a professional illusionist in Branson, Missouri. Noah and Heather met in Branson in 2005. Shortly thereafter they moved to Panama City Beach, FL and went to work for Gulf World Marine Park. They developed their show MAXIMUM MAGIC in 2006 and they’ve been performing together ever since. Noah and Heather got married in 2010 and they welcomed their first child, London Marie Wells, in 2015.

Their unique and lengthy experience in show business has been met with a lot of success and accolades, including prestigious awards for “Illusionists of The Year”, “Entertainers of The Year”, and TripAdvisor’s “Certificate of Excellence” for the past 4 years in a row. They are excited to call the HarborWalk Theater their new home, and look forward to entertaining thousands more each year right here in beautiful Destin, FL!